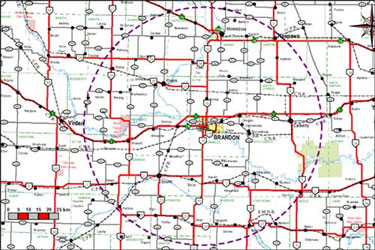 Traffic patterns and volumes have been changing throughout the City of Brandon and its surrounding municipalities during the last several years. Continued development and redevelopment within the City of Brandon, including commercial, industrial, institutional and residential, is anticipated to affect traffic patterns and volumes to an even greater extent.

To address these current and anticipated changes, Manitoba Infrastructure and Transportation (MIT) and the City of Brandon (City) commissioned this study to develop a Brandon Area Road Network Development Plan. This Plan establishes a prioritized Infrastructure Investment Plan for the City of Brandon road network and Provincial highways that provide service to and from Brandon within a 60-km surrounding area. Throughout the study process there has been a focus on the interconnectivity, dual funding, and dual responsibility between the Province and the City.

The objectives of the study include the development of a prioritized Road/Street/Highway Infrastructure Investment Plan for the City of Brandon and its surrounding area. The plan will be used to guide the development and maintenance of a safe, affordable and efficient road network to meet the projected economic development and social needs of the Brandon area over the next 20 years.

The proposed plan will focus on improving public safety, serving the regional economy and social needs while complementing ongoing land development. The plan will recommend solutions with a view to providing an efficient, economical, socially responsible and environmentally sustainable road network in Brandon and its surrounding area. The solutions are to be developed to a conceptual planning level (i.e., single line with associated functional characteristics) with preliminary cost estimates. The plan will recommend strategies that will contribute to sustainable transportation including alternative sources of funding for the recommended solutions.

The study focused on six main goals, including:

Information regarding the transportation mode choice for residents of Brandon to and from places of employment was also reviewed and compared with the Provincial average.

The existing road network for the 60-km study area consists of a mixture of roadway types ranging from local streets to Provincial highways. The primary focus of the study within the City of Brandon was on collector and higher-level roads as these roads carry the bulk of vehicle trips and typically have higher volumes compared to local roads.

A review of design and geometric standards for the City of Brandon found them to be in accordance with the latest revision of the Geometric Design Guide for Canadian Roads by the Transportation Association of Canada (TAC).

Parking standards in the City of Brandon are currently controlled by Zoning By-law No. 6642, which identifies minimum parking dimensions as well as the minimum required number of spaces for different land uses, and the Landscape Design Regulations, which sets out specific design standards for landscape screening and internal landscaped islands. The two documents set out a relatively thorough framework for the provision of off-street parking, more so than many jurisdictions in terms of identifying the number of accessible parking spaces, and setting out landscape design standards. Five modifications to these standards are recommended for consideration.

A review of collision data along Provincial highways for the years 2000 through 2004 was carried out for both the number of reported collisions by road segment and the collision rate. None of the calculated collision rates were sufficiently high enough to warrant further review.

The Brandon and Area Planning District is a partnership between the City of Brandon, the Rural Municipality of Cornwallis and the Rural Municipality of Elton. The Brandon and Area Planning District Development Plan (By-law #78/01/04), which was revised in 2005, is a long-range plan to guide development in the District. The Plan sets out objectives and policies that direct development locations and standards.

No parking issues were identified during the consultation process with City and MIT personnel. City representatives on the Steering Committee noted early in the process that downtown parking had been examined previously and was not considered a problem.

A high-level overview of safety issues was undertaken within the study area. The identification of critical areas of concern and potential remedial measures was also undertaken. A key element of the overview was a review of intersection collision data where available, and a review of selected highway links within the 60-km study area.

An extensive public consultation program was developed that included:

In total, more than 700 people visited the project website and over 100 actively participated in the project’s open houses and workshops during this study.

Recommended projects were categorized into short-, mid- and long-term planning horizons based on input received through the environmental scan, transportation planning model, public consultation program, and Steering Committee. In addition, some projects were identified as ‘beyond horizon year’ if they are expected to occur beyond the 20-year study horizon.

Preliminary class D cost estimates (based on 2007 rates and subject to change) were prepared for the recommended road network upgrades based on typical unit costs per meter of roadway, excluding land costs, taxes, utility relocations and engineering. Many of the items recommended, such as changes in classifications and updating of the traffic signal control coordination plans, do not lend themselves to easily identifiable cost estimates, therefore a yearly allowance was identified.

The following conclusions are offered: