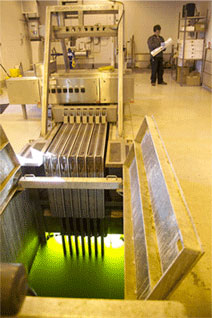 The Primary Treatment System consists of bar screens, a grit removal device and fine screens. The primary treatment facility uses mechanical means to reduce the organic compounds of the wastewater. The waste products that are removed from the waste stream are disposed of in the City’s landfill site. Secondary treatment is provided by the use of sequencing batch reactors to further reduce the organic components of the waste stream. The sequencing batch reactors use biological means to reduce the strength of the wastewater. The treated wastewater is then disinfected by the use of ultraviolet light to reduce the number of pathogens in the treated wastewater. The final treated effluent is then either discharged directly to the Assiniboine River, or if the effluent is not of sufficient quality, it sent to the lagoon system for final treatment and ultimate release to the Assiniboine River. The lagoons are also used for storage and stabilization of solids removed from the treatment process. The stabilized solids are applied to agricultural land on an annual basis.