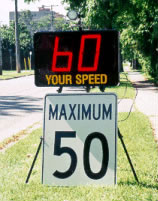 In today’s society, change is taking place at a staggering pace. Traditional thoughts and practices are no longer accepted and are being replaced or improved constantly. Over the past several decades, automobile travel has significantly increased. As arterial streets become congested, motorists search for alternative routes on residential streets. These streets are multi-purpose facilities, shared by pedestrians, cyclists, automobiles, public transit, trucks and service vehicles. For the most part, residential streets co-exist with various users in relative safety and harmony. However, in more and more cases, this is not true for all communities, with some residential streets developing major traffic concerns. These concerns may be related to traffic volume, traffic speed, street geometry, or any combination of issues. The vehicles causing the problems may be local traffic, non-local traffic, or a combination of both. The result is that traffic dominates or impacts in such a way that some residential streets are no longer perceived as pleasant or safe. Neighborhoods invaded by this traffic are losing their identity and livability. When this situation arises, community residents and local officials demand action to address the traffic and safety problems. In some cases these problems can be solved by traditional means, however, traditional means are not able to be applied in today’s world and new solutions must be considered.

The Institute of Traffic Engineers defines traffic calming as

The objective and challenge for those implementing traffic calming is to determine the best combination of measures that result in a net improvement (both real and perceived improvement) in the quality of neighbourhood life at a reasonable cost. Much consideration must be given to various factors such as cost, resident’s opinion, public services (i.e. fire, ambulance, police, snow clearing, transit) before implementing traffic calming. These factors can be the most overlooked aspect when trying to implement traffic calming in communities.

Volume control measures are intended to direct traffic to the appropriate type of roadway facility based on the intended trip. They are often used to reduce cut-through or pass-through traffic by prohibiting certain movements within a neighbourhood. Non-local traffic would thus be directed to collector or arterial roadways, rather than residential streets. Examples of volume control measures include:

Disadvantage: They may limit residential and commercial access and must be designed to effectively prevent ‘short cuts’ around the barriers.

Disadvantage: They may be expensive, may limit business and residential access, and could require legal procedures.

Disadvantage: They may be expensive and would require curb reconstruction. They may also lead to additional travel for local residents and emergency vehicles.

Disadvantage: May lead to additional travel for local residents and emergency vehicles.

Advantage: Can improve safety by prohibiting dangerous movements while reducing the amount of cut-through traffic that crosses a major street.

Disadvantage: May increase noise and air pollution as well as result in unwanted slowing of emergency vehicles.

Advantage: Provide a smoother ride for large vehicles (emergency vehicles) and are effective at reducing travel speed, though not as effective as speed humps.

Disadvantage: They may increase noise and air pollution, and their aesthetic components (textured materials) can be expensive.

Advantage: Improve both pedestrian and vehicle safety and are effective at reducing travel speeds, though again, not as effective as speed humps.

Disadvantage: They may impact drainage needs and may result in increased noise and air pollution.

Advantage: Provide a smoother ride for large vehicles (emergency vehicles) and are effective at reducing travel speed, though not as effective as speed humps.

Disadvantage: They may increase noise and air pollution, and their aesthetic components (textured materials) can be expensive.

Disadvantage: They must be designed appropriately and may be costly to implement (new curb construction).

Advantage: Easily navigable by large vehicles and reduce both travel speed and volumes.

Disadvantage: Not as effective as reducing speed as other measures due to no/minimal horizontal / vertical deflections, and may require cyclists to merge with vehicular traffic.

Disadvantage: Not as effective as reducing speed as other measures due to no/minimal horizontal / vertical deflections.